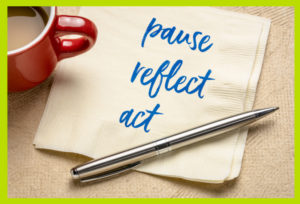 The closest experience that many of us have had in our lifetimes was the financial crisis in 2007-2008 followed by the Great Recession.  Although the root causes are different, the impact on our overall well-being is similar.  I have found myself reflecting on that experience (both personally and professionally) as well as re-reading some of the articles I wrote in the aftermath.

For example, in “Finding the Silver Lining” I wrote the following which seems applicable in our current environment:

This experience has been dramatic and traumatic for many, but has also precipitated a healthy re-examination of deeply held beliefs and self-sabotaging behaviors.  This current “consciousness” gives you, as financial planners, the perfect opportunity to engage your clients in important conversations that have the potential for changing the trajectory of their lives in a positive and profound way.

In the same article, I also referred to a 2010 study that concluded:

“Recession anxiety has triggered a clear shift back to basics in what consumers say they value most.”  The researchers found, for example, that home and family, stability and calm, saving, and the environment have all increased in importance while luxury and status are becoming less and less of a priority.

My hope is that in the midst of the fear and uncertainly of our current situation, we and our clients will experience similar insights and liberating clarity regarding what is truly most important in our lives, businesses, and communities.

In this spirit, I would like to share another article I wrote during that time, “Rediscovering Our Values.”  I hope we can gain some level of comfort and direction as we reflect on insights gleaned from difficult situations in the past and unexpected life transitions.

In an article titled “The Value of Planning,” financial reporter and futurist Bob Veres wrote:

"The vast majority of people in our advanced, prosperous society have not taken the time to figure out what they really want out of the all-too-brief time they will spend on this planet.  And because they don’t know their destination, you know they will never reach it.  They are, in a very real sense, doomed unless acted on by a powerful outside force."

Although published several years ago, Veres’ observation seems more relevant than ever—especially in light of the impact of the financial crisis on the American psyche. In fact, this economic shake up appears to be the much needed “powerful outside force” that Bob referred to and one that has served as a loud and important wake up call.

Jim Wallis echoes this point of view in “Good News about a Bad Economy,” an opinion column he wrote for the March 2010 AARP Bulletin:

"The Great Recession that has gripped the world, defined the moment, and captured all of our attention has revealed a profound values crisis.  Just beneath the surface of the economic debate, a deep national reflection is begging to take place and, indeed, has already begun in people’s heads, hearts, and conversations.  It raises questions about our personal, family, and national priorities; our habits of the heart; our measures of success; the values of our families and our children; our spiritual well- being; and the ultimate goals and purposes of life—including our economic life."

Wallis goes on to explain that this time in history “could be a transformational moment—one of those times that comes around only occasionally.”  He stresses to his readers, “We don’t want to miss the opportunity to rediscover our values.”

In fact, several surveys have confirmed that Americans are rethinking their priorities.  For example, the 2009 MetLife American Dream Study revealed that 44% of Americans feel the economic crisis has caused them to place greater importance on their family and personal life.  In addition, 59% reported that they are spending more time thinking about their life goals.

Even more surprising, 68% of consumers reported that the economic situation brought on by the recession has changed how they think and act when it comes to personal finances.  In fact, the researchers believe that increased savings together with a newfound spending restraint has given Americans a sense of personal financial optimism.

“With the ability to curtail spending and redefine success, many Americans feel hopeful about the future and optimistic about their long-term ability to achieve the dream.”

In a similar vein, results of a 2010 survey conducted by Merrill Lynch Wealth Management found that affluent Americans are returning to or holding on to core values, including an enhanced focus on what matters most such as family and friends.  And, those already retired reported on lessons learned: 51% of this group wished they would have focused more on their “life goals” and less on hitting a specific nest egg goal.

Jim Wallis concludes his opinion column with this poignant thought:

“Could there be some good news in, through, and even because of this recession?  Maybe so, if it becomes the opportunity to rediscover some important things that we somehow lost, but now might find again.”